No doubt, nearly everyone has heard someone complaining about the block of Fifth Street between Cherry and Marshall Streets being blocked off for months now. That is the heart of what is known as the “Twin City Quarter”. The quarter consists of the Benton Convention Center, two hotels and some parking decks. The blockage is caused by the fact that the Benton Convention Center is once again undergoing a serious renovation. That is inconvenient, but we might do well to consider that over the last half century, the convention center and the hotels have been the most consistently positive part of the downtown economy. 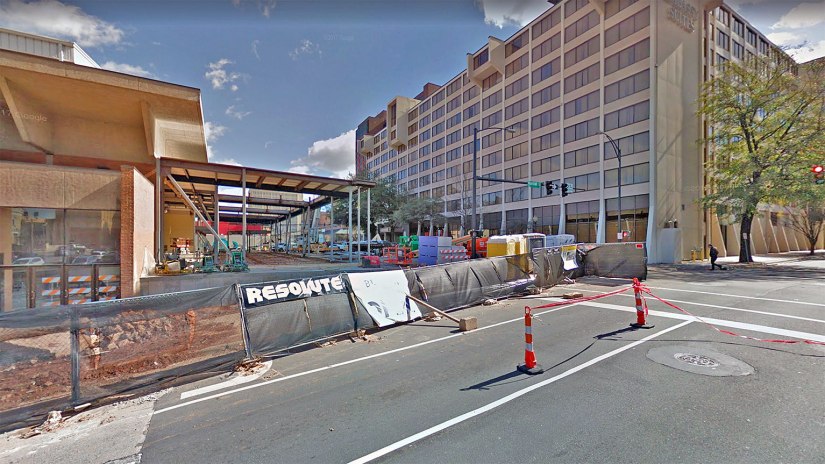 That did not happen automatically. There have been ups and downs. But it might not have happened at all, as we shall see. Here is the story.

Winston-Salem had been a convention location for many years before the term “convention center” was coined, beginning in the 1880s. The earliest conventions were religious gatherings, and state meetings of confederate veterans, political parties, educators and groups like the North Carolina Firemen’s Association.

The earliest venues for such gatherings were Brown’s Opera House, Brown’s tobacco sales warehouse, the original Zinzendorf Hotel, and, after 1896, the county courthouse. When the second Zinzendorf Hotel, considered one of the finest in the South, opened in 1906, it became the focal point of a variety of events, including several “Good Roads” point-to-point rallies, and the first organized motorcycle races in North Carolina, which were held in 1912 at Piedmont Park, near the current Smith Reynolds Airport.

But as Winston-Salem Journal reporter Chester Davis wrote in 1969: “This city’s real involvement in the inter-city scramble for the convention dollar began in the 1950s when the War Memorial Coliseum was finished and a Convention Bureau was established by the Chamber of Commerce. These moves were by no means original. In the same general period other majore cities in the state – Asheville, Charlotte, Greensboro, Raleigh and Durham – moved in the same general direction. It was a response to the times.”

Before that, Asheville and Pinehurst had been the primary convention destinations in the Old North State, but by 1963, the Twin City was in the thick of the competition. That year, the city hosted a record 93 conventions representing 61,905 delegate days and adding an estimated $1.4 million to the local economy. But there was trouble on the horizon.

In the 1950s, the downtown area had accounted for 25% of all city tax income. But since then, retail sales had fallen 20% and tax listings were down 25%. Most downtown business and property owners were in a “wait and see” mode.

As it turned out, the coliseum was too large for all but a handful of conventions and local motels were too small for even little ones, so the Twin City’s hopes rode on the aging 1920s Hotel Robert E. Lee, which had 12 public rooms capable of handling between 12 and 450 persons, so could accommodate conventions up to about 600 people. The hotel owners had joined with the Jack Tar chain in an ambitious project to add a 200 car parking deck, an auditorium-ballroom capable of serving 800 people and 40 new motel-like units across Fifth Street from the old hotel. They bought the land for the motel units for $400,000, but then could find no more money and the plan collapsed.

In 1964, the number of conventions fell to 72. That same year, Robert Ellett, the chairman of the Chamber’s Convention Bureau, suggested spending $445,000 to convert the old 1920s city market into a convention center. For a number of very good reasons, that suggestion was rejected out of hand. But a seed had been planted. In 1964 and again in 1965, the struggling Robert E. Lee asked the city and county to lower their tax valuations. Something had to be done.

Mayor Red Benton, city manager John Gold, and Chamber members Robert Ellett, Jim Haley and a few others began putting together a plan for the revitalization of the local economy. After a few false starts, in 1966 Benton introduced a $15 million city bond package that included $3.5 million for a new convention center. The Chamber of Commerce did not like the idea of spending public money to build a convention center, but endorsed the bond package anyway. The bonds passed readily. Two sites, one on the Coliseum property, the other near the intersection of I-40 and Silas Creek Parkway were suggested and quickly rejected. Virtually everyone agreed that the center needed to be downtown. Two more, one on Second Street between Trade and Liberty, the other the block directly across Fifth Street from the Robert E. Lee, were then floated. For a time it appeared that the Second Street location would win the day, but after some consideration, and a good bit of bickering over the mayor’s supposed conflict of interest, since he was also a board member of the hotel corporation, the latter was chosen.

The internationally known St. Louis firm of Helmuth, Obata & Kassabaum was chosen to design the building, with Colvin, Hammill & Walter as local associates. Their original plan came in over budget. So trimming began. Ten feet were lopped off one side of the building. The number of elevators was reduced from two to one. Even so, when the construction contract was awarded to Fowler-Jones, there was already another shortage. Money was appropriated from the street repair fund. By January, 1969, there was still a deficit of over $330,000 required to complete the building. The money was borrowed from the construction and equipment account of the Reynolds Memorial Hospital, with a firm commitment to repay. 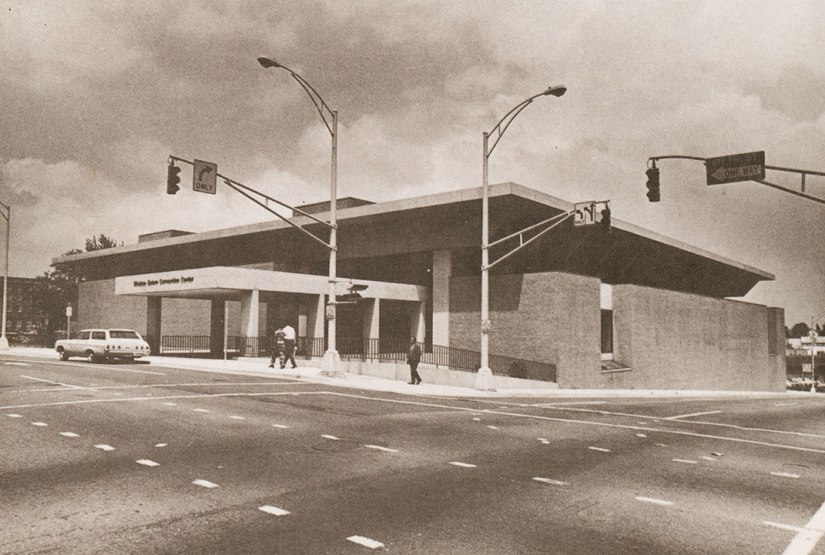 So when the Winston-Salem Convention Center opened on October 8, 1969, the $3.5 million estimate had become $4.5 million in reality. And that did not include the several hundred thousand dollars still needed for street and parking improvements and the extensive landscaping required by the plan. The final figure would reach $5.1 million. In a rare burst of honesty, one city official admitted that the $3.5 million number had been “pulled out of the air” because it sounded like a reasonable figure. Those who are paying attention will note that nothing much has changed in that respect over the last half century. 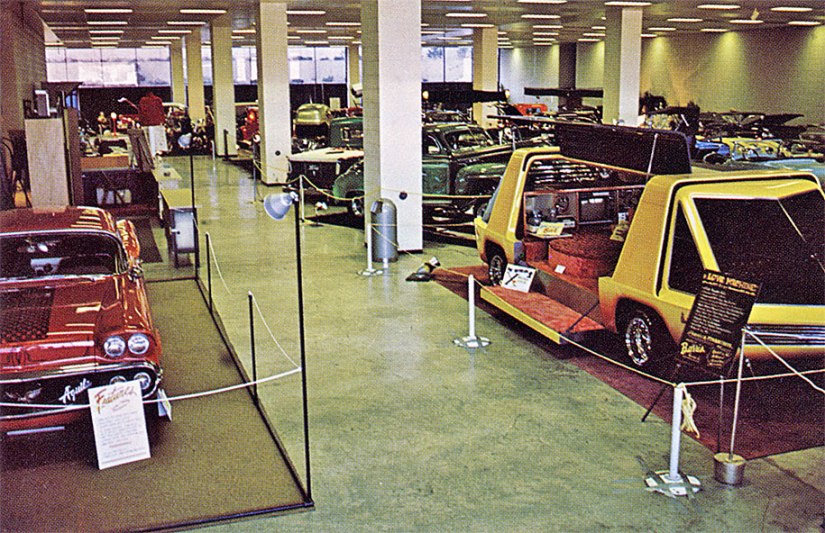 The North Carolina Rehabilitation Association paid $550 to become the first group to use a portion of the new Winston-Salem Convention Center. By October 10, Ray Baker, the manager of the facility, announced that he already had bookings for about 200 days. The center was off to a good start. A couple of weeks later, 2,000 people showed up for a barbershop quartet convention. As it happened, that was the week that the Dixie Classic fair set a new record for attendance. And on Saturday afternoon, a huge crowd packed Bowman Gray Stadium to watch Atkins High School pull off its first ever football win over Reynolds High School, 7-6. So by late afternoon, there were thousands of hungry people out and about looking for somewhere to eat.

They found that the K&W cafeteria had been closing on Saturday and Sunday for two months. Owner Grady Allred later explained that there was a severe shortage of restaurant workers in the city and that his staff had flatly refused to work weekends. The cafes at the Robert E. Lee and the bus station were packed, with long waits for tables. At the Downtowner Motor Inn, people without reservations were turned away. The same thing happened at the Sir Winston restaurant in the basement of the Pepper Building. At all the shopping center eateries, long lines snaked down the sidewalks. There are no reports of anyone starving to death, but local leaders were alarmed. They promised fixes, but they were a long time in coming.

It had been assumed that the convention center would automatically cure the ails of the Hotel Robert E. Lee. Part of the plan was a tunnel under Fifth Street connecting the center and the hotel, which would have a right of way through the hotel to connect with a planned pedestrian walkway system connecting it to the rest of downtown. The tunnel was built up to the curbline on the north side of Fifth Street. But more than one local businessman said “That is as far as it will go. It will be too expensive to go under Fifth, and nobody will be willing to pay for it.” The tunnel was completed, but it was too late to save the hotel.

At 7:30 AM, March 26, 1972, an explosion shook the downtown of the Twin City. It originated in the south side of the basement of the Hotel Robert E. Lee. 8.2 seconds later, the ten story hotel had become a two story pile of rubble. The grand facility that had hosted Joe Dimaggio, Ava Gardner, Frank Sinatra, Bob Hope, Ike and Mamie Eisenhower, Elvis Presley, the Monkees and dozens of governors, senators and other celebrities was no more.

That was the result of “urban renewal”, a disastrous idea that brought down whole city blocks of historic buildings and replaced them with chaff. All the old Robert E. Lee really needed was a thorough renovation, a bit of expansion, some visionary leadership and a new name. If we had it back today, it would be worth its weight in gold.

The Robert E. Lee was quickly replaced by a downsized clone of Atlanta’s Hyatt Regency. It had a spectacular nine story atrium with an indoor “sidewalk cafe”, but the best part of it was the separate building behind it known as Beneath the Elms, a parking deck that incorporated a basement level ice skating rink and sidewalk cafe and a cluster of trendy retail spaces.

By then, that space was connected by a pedestrian walkway system extending from Cherry Street to the new pedestrian mall, a closed to auto traffic two block area of Trade Street extending from Sixth to Fourth Street, which connected to a pedestrian bridge that led to the new NCNB Plaza, Winston-Salem Savings & Loan and Liberty Walk on Third Street. The architecture there was the best integrated of any in the city because all the space was designed by the same architectural firm. Just across the way was a new Federal Building and Fred Butner’s spectacular new Forsyth County Hall of Justice. 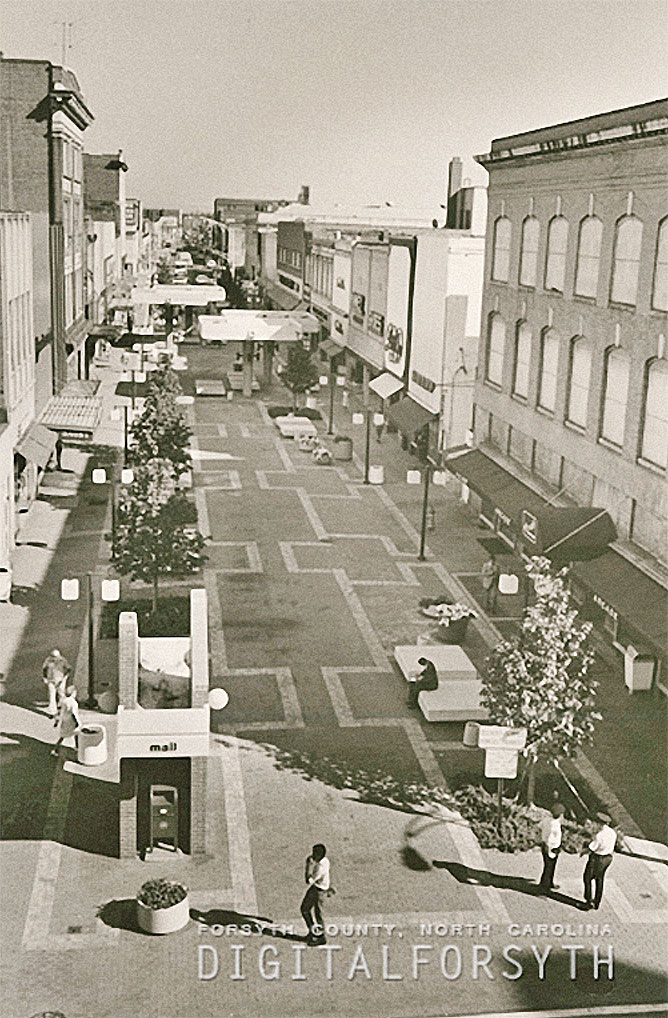 There was a lot of promise there, but in the end, for the most part, the concept failed. The heart of the whole thing, the Trade Street pedestrian mall, needed new businesses that would attract people, especially young adults, to that part of the city. But local businessmen were still in “wait and see” mode, so nothing much happened. Instead, the most memorable businesses there ended up being drab discount stores and a wannabe art theater that quickly transformed into a triple-X haven. The mall is long since gone and Trade Street restored to a two-way traffic setup.

But the convention center and the Hyatt hotel flourished, to the point that within ten years a much larger hotel, the Winston Plaza, was built across Cherry Street from the Hyatt. Since then there have been a number of changes at the hotels and at the convention center, with major renovations made at the center in 1994 and 2006. 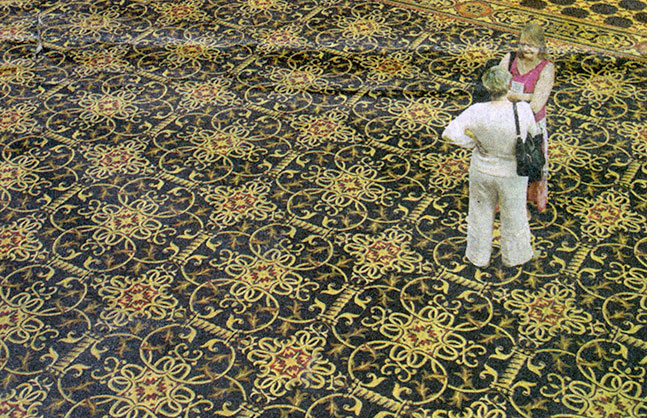 In 2004, the Atlanta-based Noble Investment Group bought both hotels and assumed management of the convention center as well. The area was given a new name, the Twin City Quarter. The old Hyatt is now called Embassy Suites…the old Stouffer is now the Adams Mark Winston Plaza. It will be interesting to watch as the area continues to develop.

This site uses Akismet to reduce spam. Learn how your comment data is processed.